April is coming to an end, and it has been a whirlwind month! April 14-15, the dogs and I headed to York, PA, for Clean Break’s huge 2-ring Flyball tournament. Dandy and Tempo raced together on the same Open team which was made up of a very special line-up of dogs. Elizabeth came all the way from Wyoming with two of the Token/Blur kids, Jake & Nikki, so the 4 Token kids could race together. We were joined by Lisa from Colorado and her cool little Sheltie as a height dog so we could have 8” jumps. We raced under the banner of Elizabeth’s San Diego club Fast Fourward, and our team name was “Everything’s Shiny” as we are fans of the old TV series “Firefly”. Of course, racing my two dogs on the same team did have its complications…I had to find someone else to run Tempo. Dandy was start dog, Jake was 2nd, and with our height dogs running last, Tempo ran 3rd. Enter this awesome kid from Two-Lane Highway, another club that was graciously loaning us their box and boxloading for us. Braydon is just 10 years old, but he did an awesome job running Tempo. He even got Tempo his new ‘best time’ running ‘in the pack’ with a 4.30! Tempo did a great job running even while I was calling Dandy to me and tugging with him. He did look for me as he came back with his ball, so Braydon would run back to where I was with Dandy. I do think Dandy was a bit put-off sharing the spotlight with Tempo, but he managed to deal with it <G>. My personal “best” of the weekend was getting a 0.000 start with him! I had gotten that once with Token, this was my first time with Dandy.
Another thing making this event special was the debut of Nikki. She took over as height dog for several heats (12” jumps) and did awesome, earning her FD & FDX!!! I was so thrilled for her and Elizabeth, it was a very special occasion! Still working on getting video processed. But we did get a picture of the four Token kids together. L-R: Nikki, Jake, Dandy & Tempo 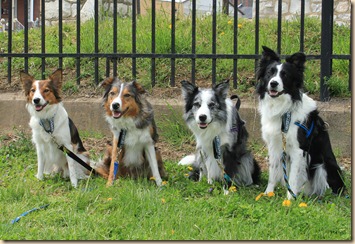 The following weekend was a 3-day USDAA Regional Championship in Palmyra, PA, the Mid-Atlantic Agility Showcase held at In The Net, a fabulous indoor sports arena with a terrific turf that is great for running dogs. This was a huge 3-ring event, with high caliber competition.
Tempo did really well with oh-so-close runs. He ended up on a last-minute pick-up team for the Dog Agility Masters Team event, along with another 26” jumping BC and a 12” Papillon. Out of 63 teams, we qualified and ended up in 12th place! Tempo had just one refusal each in Team Standard & Jumpers, I was very proud of his runs. He also ran in Round 1 of the Regional Grand Prix, and had just one refusal. In Round 1 of Steeplechase, he had one bar down putting us out of the running for Round 2. But for a young dog without much trial experience, he did great!
Tempo in Team Jumpers

Dandy’s team of 3 Border Collies also qualified and were 14th out of 63 teams. Dandy was clean in both Jumpers & Standard, qualifying in both, 14th & 8th place respectively. This also qualified him to run in Round 3 of the Triathlon, a hybrid course with weaves and seesaw. He ran clean but not the fastest, we ended up in 9th place which I was quite pleased with. We had some hiccups in Round 1 of Steeplechase, but made it to Finals. I made a handling error (due to momentary indecision) that caused Dandy to knock a bar, so we did not place. Had he not hit the bar he would have earned a bye into Semi-Finals at Nationals. Dandy had a bye to run in the Grand Prix finals at this Regional, but I ran him in Round 1 anyway. He ran clean and was 10th place. In the Grand Prix Finals, I didn’t run it exactly as I walked it (which was the theme for the whole weekend with me!) but he ran clean and again was 10th place, earning him the coveted “Bye” into Semi-finals at Nationals. I was not planning to go to Nationals this year as it’s in Colorado in September, and I may not have enough vacation time left. But now that he has a Bye, I am trying to see if it’s possible.
Dandy in Team Jumpers
Dandy in Triathlon Hybrid Round

Over the 3 day event, Dandy never missed a contact or a weave entry, and only knocked one bar which was totally my fault. Team Gamblers & Snooker could have been better, had I handled better….but Dandy ran clean in Team Jumpers, Standard & Relay, Round 1 of Steeplechase and both rounds of Grand Prix. I could not be any prouder of him!

The month of May will bring us a whole new adventure as we head to Texas for the IFCS World Agility Championships. This is an international event, with each country allowed 3 dogs in each of the 4 jump heights (12”, 16”, 22” & 26”). The USA team will be a force to be reckoned with and it will be fun to cheer them on. However I will also be cheering for Team Australia. Australia & New Zealand are eligible to compete at this event but quarantine regulations make it impractical for them to travel abroad with their dogs. In the spirit of sportsmanship, they are invited to compete with dogs loaned to them by the host country. Back in February, USDAA put out a call to ask for volunteers with solid Masters level dogs who are willing to run for other handlers. Two friends and I decided to offer our dogs as “Loaner Dogs”. After submitting videos and questionnaires, the 3 of us were thrilled to learn that our dogs were chosen to be part of Team Australia. Dandy will be running in the “Maxi” division, jumping 26”, with one of the 12 Australian handlers. Tempo is “2nd Reserve” for the Maxi division, so it’s highly unlikely he will compete but he will be on hand in case of a last-minute emergency. The event takes place May 11-13 at the Will Rodgers Equestrian Center in Fort Worth, TX. We will meet with the Team Coach, Manager and handlers on May 5, and will have training sessions every day leading up to the event. This will surely be a very unique, once-in-a-lifetime experience. Being part of a world team is certainly not part of my own reality, but Dandy is talented enough to be there, so I’m looking forward to this event, and hoping that his Australian handler has a great ride with Dandy!