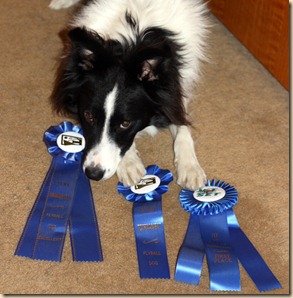 Tempo made his debut in Flyball at the Jet Set tournament in York PA, December 4-5, 2010. At 14 months of age, I am still in shock...he maintained his boxturn all weekend!!! And he never faulted! He only raced 2 heats of 2 races on Saturday (5/5 format). He had ONE warm-up run before his first official heat. In his first heat, he dropped the ball at the box, it rolled all over, but he got it & brought it back over the jumps (no fault)...I was so impressed that he figured out to get back in the lane....and the correct lane, no less!!! His first race was in the Right Lane, which is hardest for him since he turns Left. Tempo was in the Right Lane for most of his races, and he never once crossed over to the other lane.

On Sunday, he ran all 5 heats in 3 of our 4 races. I didn't want to jeopardize the team's "wins" by running Tempo but even with Tempo running, we maintained our times, running in the 18's on Sunday, and were winning races! Tempo averaged 4.8 with the (semi-wide) pass, but he did post one decent time of 4.59. I did early-pass him once (MY fault), when he got a 4.4; but what impressed me was that he stayed in the lane with the early pass, so he wasn't too intimidated. :) He is not yet driving full-speed, he seems to be thinking about it all, but I'm thrilled with his consistency. He only bobbled the ball that ONE time, first heat. And the team he was on jumps 11", so that was another factor in the challenge for a baby dog. He ran anchor so he has yet to have a dog pass him on his way back, but that will be the next thing to try at practice this winter.

Tempo earned his FD (Flyball Dog) and FDX (Flyball Dog Excellent, 100 pts), with 341 points for the whole weekend. And his team placed First in Regular Division 2! A great way to earn his very first ribbons!

Setting the standard for Tempo to aspire to, Dandy raced well all weekend, his only faults being MY early passes. He earned 635 points and he finished his FMX title! (10,000 pts, Flyball Master Excellent). Dandy’s team was undefeated, placing First in Multi-Breed Division 1!

Token raced on our Regular Division 3 team, which placed 2nd out of 9 teams! He earned 675 points, benefiting from the 5/5 format. Dandy covered for him in a few heats as he twice decided to come back without the ball. I don’t know what was going on, but I pulled him and had Dandy finish those 2 races. Token is less than 500 points away from his ONYX title (20,000 points), so hopefully we will finish that title at the next tournament in February.

An exhausting weekend, but lots of fun. No events now until February, time to take a break