New Titles for Tempo in February

Tempo earned his FDCH-Gold title at the Weston Whirlwinds Mardi Gras Madness Flyball Tournament in Westborough, MA, on February 11-12, 2012. It was especially fun as he raced on an Open team with his littermate Maze! Their team took 1st place in Open 3 Division.

Dandy also raced on an open team that was all friends with dogs that also do agility, so it was very cool! Their team took 2nd place in Open 1 Division.

The following weekend we went to one day of a USDAA Agility Trial in Barto, PA, hosted by Keystone Agility Club. Tempo didn’t Q in Advanced Gamblers, but we did get the Q that we wanted most, his 3rd Advanced Standard leg to finish his ASA title (Advanced Standard Agility) with a 1st place. Running past a jump and stopping on contacts, he ran the 155 yard course in 38.8 seconds, so he has potential!

He also ran super in Grand Prix…no Q but he was awesome. He ran past a jump for one refusal, then I was out of position for the next jump & we got another refusal. But the rest was fantastic, I was so proud of him! I was super pleased with his jumping & contacts & weaves but I was most impressed with how he handled the first 3 obstacles, his collection at the #2 Jump was lovely!

Dandy was only entered in Master Gamblers and Standard. I asked my friend Judy to run him for me as an experiment to see if he would run for someone else. They had a couple of miscommunications so no Q’s but he did really well with her. He looked for me at the start line but once he was off and running, he was there for her! It was fun to watch him run from a new perspective.

More flyball & agility coming up in March. I’ve been battling some back pain, so I hope that gets under control quickly. 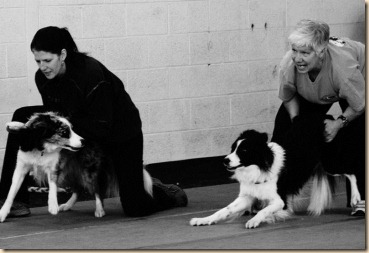