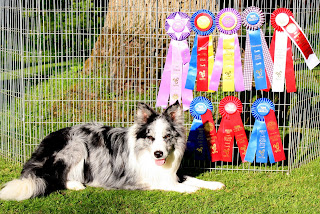 On May 22, 2010, Dandy qualified in Master Gamblers at the Contact Agility Club USDAA trial in Dover Plains, NY, finishing his Gambler Master title (GM). He also qualified in Steeplechase, and in the Finals was 2nd place (he had the fastest time but a bar down). He ran Pairs with another Border Collie named Skye, and we won the class with a clean fast run.
We had a very rough weekend in extremely hot & humid weather at the Keystone trial June 12-13 in Bethlehem, PA. Dandy did qualify in Master Gamblers but we missed putting it together in our other classes.
We went to the 3-day Y Agility trial at The Blackthorne in the Catskills in NY June 18-20 needing to just qualify in Master Jumpers to finish Dandy's ADCH. We had two shots at it with Jumpers being our first class Friday morning, and also the last class on Sunday. Dandy is often very amped up for his first class, and he often will knock bars in that one. Besides Jumpers being our first class of the weekend, it was also in the hilly ring, with all the bumps & dips. I ran Token first, and my front cross on the take-off side of a jump caused him to get a refusal. So I chose a different strategy when I ran Dandy, just a few minutes later. I went with a landing side front cross, hoping that would not cause him to knock the bar. We managed to execute it very nicely, and Dandy not only qualified but won the class! This finished his Jumpers Master title (JM) as well as his Agility Dog Champion title (ADCH) on June 18, 2010! Token just finished his ADCH at the Blackthorne in August 2009, in Jumpers, in the very same ring. Token was 6 yrs 4 months old at that time. Dandy is just 3 yrs 7 mos old, and he is my "youngest" ADCH title (he is #5, following Robin, Toss, Tripper & Token). Dandy truly is gifted, and I am so very proud of him.
Finishing that title on the first day assured me of having an enjoyable weekend, regardless of how the rest of the trial went. But then Dandy gave me so much more! He qualified with a 2nd place in Grand Prix, finishing his Tournament Master title (TM). He qualified in Steeplechase and took 1st place in the Finals. He qualified in Masters Standard with a 1st place. And for the last run of the weekend, Master Jumpers, he qualified again, with a 2nd place. Even the runs that were not qualifying, he continued to run beautifully. He really gave me his all, he is such a good boy!

Poor Token, I have been focusing so much on Dandy this season that I have not been able to give him 100%. He has only been entered in 2 classes per day for the last few trials since the entry fees really add up with two dogs. Even though he's running well, we still have our little bobbles that keep us from running clean. I hope to be able to give some focus back to Token now that Dandy's ADCH has been achieved.
We did do one run totally for fun at The Blackthorne. In Saturday's Master Pairs, I entered Token & Dandy together! I ran Dandy in the 2nd half while my friend Debbie ran Token in the first half. Dandy was totally out of his mind watching Token run! Both dogs had off-courses, so naturally we didn't qualify, but it was fun to run father & son together on Fathers Day weekend!

Since Dandy qualified in Grand Prix, he is now fully qualified to run in all the classes at the USDAA Nationals in Louisville, KY, in October. He will compete in Grand Prix, Steeplechase and Team. Token is qualified to run in Steeplechase & Team at Nationals, but not Grand Prix. I don't think I can get to enough GP qualifiers between now & September to try to get Token qualified, so that is no longer a goal. But I'm quite content to be running Token in 2 events and Dandy in all 3.

Tempo is now 9 months old, and will be going to Agility Camp in August to get him started. I'm not quite sure how I'll find time to train all three dogs, but I'll do my best! ;-)

We will be taking a break from trials for a few weeks, we have some training issues to address, and we'll continue enjoying the lake during the hot summer.
Posted by Linda at 7:43 PM No comments: