September 2002 - Brace Class at USDAA Agility Trial in Maryland
Brace is just for fun and not offered very often at all, but it's a hoot to run and watch! I ran Robin & Chad as one brace team, and Toss & Tripper as another team. The weave poles in this course were 2 sets of 12, the 2 dogs could do the same set of 6, or they could each do one set, and if they did this simultanously, it was worth 5 bonus points. With a time plus faults scoring system, it was not worth the extra 5 points to 'set it up' to have them each do a set of 6 poles, so I was just planning to have them do the same set consecutively. However, when I ran Toss & Tripper, Toss had his own plan to get the 5 bonus points, and he performed the far set of weaves while Tripper did the closer set, and besides wowwing the crowd, they took First Place :-) Toss was always a very creative Border Collie, and this is such a perfect memory of him. I am so thankful to have these runs in my video library:


July 2004 - Robin & Chad have one last run together in Brace at Agiledogs in NY. They were 11 years old at that time, and were able to jump 16" as their Performance height. Those two boys adored each other, this is a very special memory. 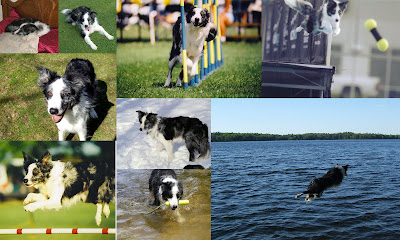 I said Good-Bye to Toss today. Suffering from kidney failure, it was time to let him go.
Toss earned lots of titles in Agility, including Agility Dog Champion, and he even earned his Companion Dog title in Obedience. In 1999, he won the 24" division of the PupPeroni Eastern Regional tournament. In 2000, he was part of the winning team in the Dog Agility Masters Team Tournament in Saratoga, NY. His teammates Elan & Quincy have already passed on to the Rainbow Bridge, so maybe they will join forces again :-)
But more important than his accomplishments...he was a very unique & special Border Collie. He was very careful & methodical in the agility ring, but he would dive off the dock at the lake with complete & utter abandon. The lake was one of his favorite places to be.
Toss also had a unique ability to look at photographs of dogs and recognize them as such. He even showed "preferences" towards certain breeds (he would bite the picture if it was a Jack Russell Terrier!) He was also an avid TV watcher, his favorite movie was "Babe", of course :)

So easy to live with, a gentle soul with a real creative streak, he will always hold a very special place in my heart. 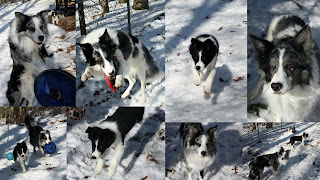