The 2011 USDAA Cynosport World Games (a/k/a Nationals) is now history. The event was 6 days long, which is L-O-N-G. But I’m so glad I was a part of it. I drove down to Louisville, KY, on Monday, October 10, and drove home the following Monday. I managed to do the drive in 12 hours with just a few short pit stops. Thankfully the weather was nice and sunny on both of my travel days, which made it more pleasant.

The day before I left for Kentucky, I felt a cold coming on. By Tuesday, it was in full swing, and I was pretty miserable. On Thursday, I felt a little bit better, and by Friday, most of the cold had left my head. I still had an itchy throat, but breathing was much improved. I survived on lots of antihistamines, decongestants, cough drops and tissues.

My experience at Nationals had its share of highs and lows. Tempo was not entered as he is not ready for that level of competition, so it was just Dandy for this event. The warm-up class on Tuesday was just awful…Dandy had not been worked in several days, and after a 12 hour car ride on Monday, he was pretty wild! The course was a Grand Prix-style course, and while he nailed his contacts & weaves, and kept the bars up, he went off-course three times! I was not handling well at ALL, as I was feeling terrible from my head cold, so combine that with a wild Border Collie, and things did not go well. I was terrified that this was a prediction for the next 4 days. I was VERY glad that Tuesday’s class didn’t count for anything, and glad I DID enter it as a practice session. I was just hoping that I could get my act together for the next day… Wednesday through Saturday would be four Team Classes, plus Grand Prix & Steeplechase Quarterfinals. Dandy was teamed up with two other Border Collies for the Team event (3 dogs/handlers, 4 classes plus the Relay for the top 30 teams out of 170 teams.)

On Wednesday, we ran Team Gamblers. I was still off due to my cold, so I’m glad it was Gamblers where I could improvise a bit. We didn’t get the big bonus points as they required distance skills, which are a weakness for me & Dandy. But we managed to get a respectable number of points, placing us in the middle of the pack. On Thursday, we had Team Standard, and that course was chewing ‘em up & spitting ‘em out! I didn’t run until the afternoon so I got to watch a number of runs while scribing that class in the morning. Dandy ran the course clean, held the contacts, and we ended up 17th out of about 120 26” dogs.

We also ran in Steeplechase Quarterfinals, which was a heartbreak…I had high hopes of making it to the Semi-Finals as Dandy usually does well in Steeplechase. He ran the course beautifully but he got hung up in the middle of the weavepoles as they were not securely staked; I heard the metal bases clanging, and wasn’t sure what happened until I saw Dandy exit incorrectly. At that point, I knew he missed a pole, so I had to do the weaves over again. Unfortunately, this cost us too much time and we missed the cut-off for the Semi-Finals by less than one second.

On Friday, we ran Team Snooker and Grand Prix Quarterfinals. Team Snooker went well, I went for three 7’s in the opening, which we got, and almost got through #7 in the closing, but with only 48 seconds, we didn’t quite make it; we just missed getting the 7 in the closing, so we ended up with 44 points. Grand Prix was yet another heartbreak. It was another tough course with a particularly gnarly section offering multiple off-course options. I handled well without choking; Dandy was brilliant, doing everything he’s been trained to do. Unfortunately, he was faulted for missing the ascent contact zone of the dogwalk. He has NEVER been faulted for “up contacts”, and whether he actually hit it or missed it, I can’t say for sure. Someone who was watching his run said he did hit it with his rear foot/feet. A few other 26” dogs were faulted for the same thing, so it appears that the judge wanted to see *front* feet in the contact zone. Bottom line is that we incurred 5 faults, and we would not be advancing to the Semi-Finals. Again, a fluke thing…some bad luck…and major disappointment…but it was still a beautiful run and one I’m very proud of.

Without advancing in Steeplechase or Grand Prix, we had just one run on Saturday, Team Jumpers. Once again, a gnarly course! I saw many great teams go off course. Dandy was once again brilliant, we were clean right up until the next-to-last jump when I rushed a rear cross and incurred a refusal, but it was just a little bobble in an otherwise beautiful run. Again, I was SO proud of Dandy.

Sunday was Team Relay and Grand Prix Finals, so it was a day to relax and watch some of the best agility teams in the US. I ended up working every class, including the GP Finals, and I’m really glad I did. Last year, I watched from up in the stands, and felt that I would NEVER be able to handle that pressure…it just seemed way too scary! But sitting in the ring, setting bars and fixing tunnels, helped me realize that it’s still just agility. It’s you & your dog, doing the thing you love, but with the added excitement of going for gold! It would be amazing to someday be in the finals, but the competition is intense even in quarterfinals at Nationals, and anything can happen to anyone. A missed contact or a dropped bar might mean the end of one’s advancement, but it’s not the end of the world…just look at your dog’s face and he will tell you, it was still a blast!

Overall, Dandy was amazing. In the 4 team classes, he rocked…he got good scores in Gamblers & Snooker, just one refusal in Jumpers, and CLEAN in Standard. Our teammates had a bit of bad luck, so our team did not advance to the Relay but it didn’t matter…Dandy was awesome! In Steeplechase & Grand Prix quarters, it was just bad luck that kept us out of Semi-Finals. Again, Dandy ran beautifully! Throughout the 7 classes over 5 days, Dandy nailed every (down) contact & every weave entry. Not one bar came down, his jumping was stellar. He incurred just one refusal, and his only off-courses were in the one warm-up class. He did not come home with any ribbons or prizes but he truly ran like a champion all week. I could not be any prouder of my special boy.

Tempo was such a good boy all week long…I did take him out one day to the practice jumps when no one was using them, and jumped him for a couple of minutes. He was SO excited to get to play; too bad he couldn’t have played MORE. And a sidenote, he kept the bar up on every jump. He did get to play with his brother Quid, and with Dandy, every night in the motel room. Not a real exciting week for him but he never complained, he was a very good boy.

I did have several moments of tears…it’s just very hard to be at an event such as this and not feel the pain of missing Token. I bought a Rainbow Bridge charm for my bracelet, placed next to my tri-merle Border Collie charm. He is always in my heart…

Next year, USDAA Nationals will be in Colorado. I’m not planning on making that trip…1700 miles, high altitude, trial outdoors where weather can be snow or 80 degrees…but I sure do want to take Dandy to Nationals again someday! And Tempo needs a chance, too, so I’m hoping for another “east of the Mississippi” event someday. 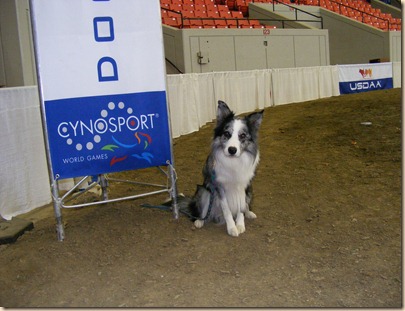 wow! what a busy week for you all! loved all the videos...you and Dandy looked awesome!

Thank you for providing me with something beautiful to read at 1am. I love the photo of dandy ... He looks so proud of himself, as he should be ... And you along side him.

you guys looked great out there! such teamwork. You should be very proud.