Dandy's Adventure In The Big Apple 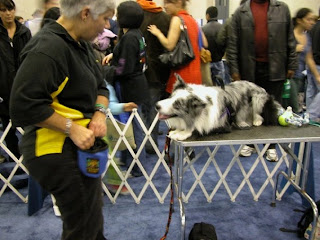 On Sunday, October 18, 2009, Dandy and I ventured into New York City, to the Javits Center. The event was AKC's Meet The Breeds, which was a 2-day extravaganza that invited the general public to meet many different breeds of dogs and to watch demonstrations such as Obedience, Agility, Police Dogs, Earthdog and Flyball. My flyball club, Infurno, was invited to present the Flyball demo. I was not about to attempt driving into Manhattan by myself, so I only went on Sunday when I was able to ride in with Valerie from my obedience club. Knowing we'd have to walk a couple of blocks from the parking lot to the Javits Center, I brought just one dog. And I was glad I made that decision! For Dandy's crate, I used a little pup tent that stores in a small duffle bag...that plus a bag for all of our "stuff" was enough to deal with while walking one Border Collie who decided that every square inch of the streets and sidewalks needed to be sniffed!
Once inside the Javits Center, we were met with thousands of people. Wall-to-wall people. Trying to get through the crowds was painstakingly slow. And everyone wanted to reach out and touch the dogs...and they did!
Eventually we made it to the crating area, which was nice & quiet, behind curtains, away from the crowds. Prior to our demo in the main ring, we had a bit of a Meet & Greet in one of the small demo rings. The dogs showed how they trigger the flyball box, grab the ball, and run back to get their reward, which is a game of tug for Dandy. In between, the dogs were constantly being petted by children & adults alike, with many of them pulling out their camera phones to snap pictures. 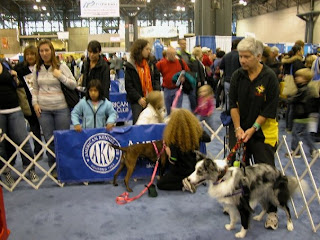 Dandy was awesome...he was a wonderful ambassador for his breed, so I had my work cut out for me in convincing people that a Border Collie is NOT the best choice for a family pet! Dandy is cute, he's sweet, and let the kids pet him over & over without any objections at all; he was a model citizen! But I let people know that Border Collies need not only physical exercise but mental exercise as well, every day. And many are not as good with kids as Dandy is. Fortunately, there were over 130 other breeds there for people to investigate.
(And if a dog didn't suit them, there was also a huge section of the exhibit devoted to cats, sponsored by the CFA.)
The most interesting question I got regarding Dandy was when a man asked, "Is that a Bernese Mountain Dog?" Ummmm....not quite.... Well, maybe he was a cat person ;-)
Our Flyball demo in the main ring was lots of fun, and Dandy didn't miss a beat, even though he has not done any flyball at all since May. But what I'm most proud of is how he handled himself in a very overwhelming and stressful environment. He IS my Pride and Joy :-)