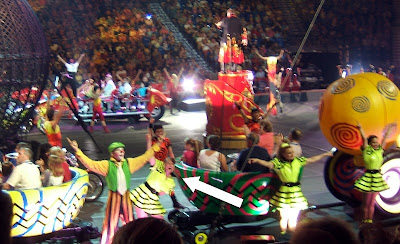 My agility weekend was preceeded by a trip to the Ringling Brothers Circus on Friday night, to see my friend Gail perform. Gail Mirabella is my first flyball instructor and team captain, and she is responsible for unleashing Token into the world of Flyball. Gail has been with the circus for over 2 years now, performing with her Aussies, Border Collies, Rat Terriers, and little terrier mix Cricket, showcasing their skills with flying discs as well as some agility. It was great fun to see Gail & the dogs again, and to watch them perform in "The Greatest Show on Earth"!
So...I was a bit tired on Saturday morning but on we went for another busy weekend of USDAA Agility, this time in Carmel, NY.
The successes (as well as the not-quites) this weekend were more evenly distributed between Token and Dandy. Dandy earned his second leg in Starters Gamblers with a First Place. And he qualified in Starters Jumpers, with a 3rd place...he missed one jump that we had to "fix", which took some time, but the rest of the course was lovely! Just minor glitches in the other classes that prevented qualifying. I ran him in Steeplechase just for kicks, since it's Time plus Faults scoring, and he actually did great! He didn't qualify as he missed the Broad Jump (twice!) and we had to fix that, which took too much time, but the rest of his run was awesome! I was extremely proud of the baby-dog, only 18 months old!
Token also had some minor glitches in some of the classes, but he did qualify in Masters Standard on Saturday and WON the 26" class! Sunday morning, we had Master Gamblers, which is a challenge for us with Token being quite handler-focused, but this one worked for us, and he got the gamble to earn his fifth leg and his Gambler Master title! And for icing on the cake, he WON that class, too! (First time he's ever won a Master Gamblers class)
Once again, both boys were a blast to run, and they made me proud. :-)