In September, we took a long road trip out to Colorado to compete in the USDAA “Nationals” n/k/a Cynosport World Games, held at Dick’s Sporting Goods Park in Commerce City, CO. Both Dandy & Tempo competed in all 3 tournaments: Grand Prix, Steeplechase and Team. Amongst the challenges were the 1800 mile drive with two friends in an RV (and a total of 7 dogs), the change in altitude at a mile high, and the intensity of a huge international event. Competitors attended from not only the US, but also Japan, Russia, Mexico, Canada, Puerto Rico, England, Spain & Switzerland.

It was indeed a long drive but staying in a fab RV was a fantastic way to do it, so I’m lucky to have been invited to join Jeannie & Kathleen on this RV journey. We were able to stay “on site” at Dick’s Sporting Goods Park, which was a real luxury to me, no travelling back and forth to motels and having the convenience of “home away from home” right there 24/7.

This was my first time “out west”…seeing the Rocky Mountains as a backdrop every day was magnificent, I just love mountains. A bonus is that I didn’t have to take any allergy meds the whole time I was out there! As soon as we drove back into Pennsylvania on the way home, it was back to antihistamines and decongestants.

Dick’s SGP is a huge outdoor complex with a stadium and a plethora of soccer fields. One section was dedicated to our event, and there were 3 rings on grass as well as 3 rings on an artificial turf that was fabulous for both handlers and dogs to run on. The main ring was on turf with bleachers on two sides. One of the 3 grass rings was deemed unusable for the entire event as we had two nights of rain that was more than Commerce City had seen all year. In order to not turn the one grass ring into mud, it was abandoned. The organizers did a great job of reassigning all the classes scheduled for that ring, so the event went on with just 5 rings without much difficulty. Even though we had two nights filled with rain, the weather during the days of the event were pleasant and mostly sunny.

Overall, I was happy with my dogs’ performances. Some runs could have been better, of course, but it was a great experience regardless of results.

TEAM EVENT: Tempo ran in the 4 classes for the Team event, and though he E’d in Jumpers (off course in wrong end of tunnel) and had a terrible Snooker class (8 points!), he hung on in Standard to get a score, and had a very good run in Gamblers. Dandy did well in his team classes, his worst being Snooker with 31 points. He ran clean in both Standard & Jumpers, and had a terrific run in Gamblers to place 10th in the 26” class (though they only gave placements up to 9th place!).

STEEPLECHASE: Both Dandy & Tempo made it to Semi-finals but did not advance into the Finals. We ran Quarterfinals around 9:00 at night on Wednesday, and hoping to finish before a big storm moved in. (We got back to the RV in the nick of time!) I was surprised to do as well as we did under the circumstances. Tempo did well in Semi-Finals but knocked a bar…he needed to be clean in order to advance in that competition. I really wanted Dandy to make it to Semi’s as he’s a great Steeplechase dog…but I made a huge mental error. On his approach to Jump #3, my mind went to the wrong place…I thought about how well he could do if someone else were handling him…and at that very moment, he crashed the jump AND the wing, which is something he has never done. We had a disconnect after that for an off-course. So I blew it. But it was a very valuable lesson: I need to focus on me and my dog and nothing else, and run him to the best of my ability. I need to focus on our strengths, not our weaknesses. I was disappointed but not devastated, and I will be better prepared mentally in the future.

GRAND PRIX: Tempo went off-course at the Aframe/Tunnel discrimination in quarter-finals, so no advancement. It was unfortunate that GP Quarterfinals as well as Steeplechase Quarterfinals were held on Wednesday, the first day of competition, we were not at our best after spending the previous 5 days/nights in the RV, on the road with no opportunity to train. Thankfully, Dandy had earned a Bye into Semi-Finals, and the Semi’s were held on Saturday. He ran clean but did not make the cut for Finals. They only took the 16 fastest dogs, and I needed to be much more aggressive than I was to be competitive. But I survived my first time in Semi-Finals and am very proud of Dandy. This was an important experience for me as I tend to get very nervous in the ring, but getting through the run without choking or losing focus was a “win” for me. I realized that I will have to be more ambitious in the future if I ever hope to advance. Changing my habit of “just trying to run clean” into “run clean AND fast” will take some work, I’ve been running conservatively for nearly 20 years! But it’s time to try to step out of my comfort zone. I have an amazing dog who is capable of so much, and even though I’m not young & athletic, I can push more by handling more strategically and making the most of my dog’s skills. While I have no aspirations to actually WIN, I really do have to set my goals a little bit higher than “just run clean”.

I have so much to be proud of with both of my dogs. I was confident in knowing my dogs would stay at the start line, I was confident in their contact performances being spot-on, and even though they don’t always keep the bars up, they are talented jumpers. It was a pleasure to enter the ring with them and know they had great training behind them as well as athletic ability and drive and desire, even if my handling sometimes let them down.
They have very good weave skills as well, but the 22” spacing on the weaves at Cynosport really threw Tempo off. We see nothing but 24” weaves at trials, and he had a hard time finding his rhythm with the 22”. I know he CAN do them, he did them fine when we encountered them in Texas in May. But the Cynosport environment made him very high, and even being outdoors was something he has not habituated to since almost every trial we did this year was indoors. Dandy is more seasoned and was able to adapt to the weaves with no issue, but it was harder for Tempo.

Grand Prix Finals were held on Sunday, and since we were not running, I accepted an invitation extended to Dandy to join a Colorado Flyball Team who was racing at the event. (Dandy’s half-brother Jake was on the team so at least we knew one dog there.) Dandy took a moment, wondering what we were doing – he had not even seen a flyball box since April - but then quickly switched gears from Agility to Flyball. Racing for the first time outside on grass presented an entirely new picture to him. He took the position of start dog, we had great starts and he averaged 4.0-4.1, helping the Agents of Chaos secure 1st Place in Regular Division 1. We were awarded a gorgeous Cynosport 2012 medallion for winning and it’s a beautiful memento of our Wild West Week!

Besides enjoying a wonderful event with dogs, friends, nice weather and lovely scenery, I came away from it all with much to be happy about and also much to think about for next year. Beyond the training and mental management that are key points, there is one more thing that I need to consider…I need to be better prepared next year by getting to more trials. 2012 was a unique and fantastic year for me that included two very big trips, which is out of my comfort zone, but I loved every moment and I would not change a thing. The World Agility Championship in Texas in May was a once-in-a-lifetime experience that has been the highlight of Dandy’s career, and it was worth any sacrifices made to get there so that Dandy could compete with Team Australia. And when I made the commitment to go to WAC, I had no intentions of going to Colorado. What I have to do differently in the future is to simply try to budget my time and money more effectively. In 2012, my competition days totaled about 10, not counting the two Regionals I went to. By the time Cynosport arrived, I felt I had not competed enough to be prepared, I felt “out of practice”. I need to plan for Cynosport in 2013 in Tennessee, to insure that my head is in the game and the dogs are well-rehearsed but not burned out.

When all is said and done, my heartfelt gratitude goes to Dandy and Tempo for bringing so much adventure and joy and love to my life! 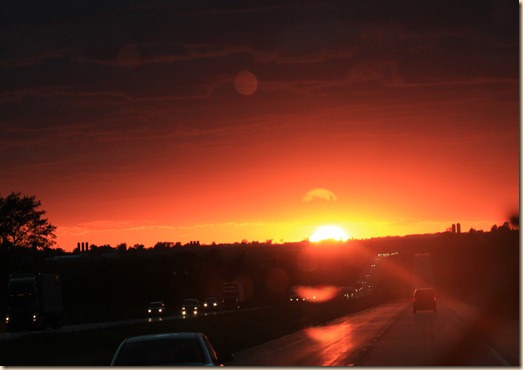 Indiana Sunset from I-80 West 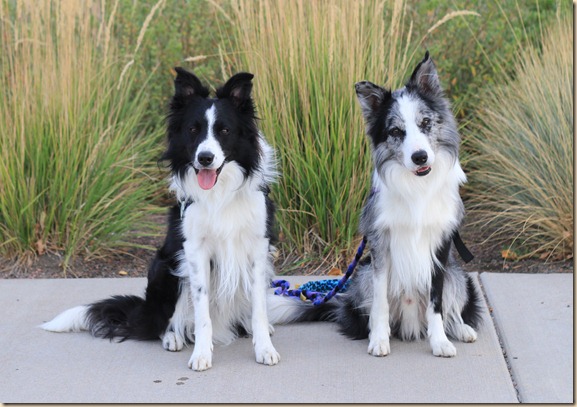 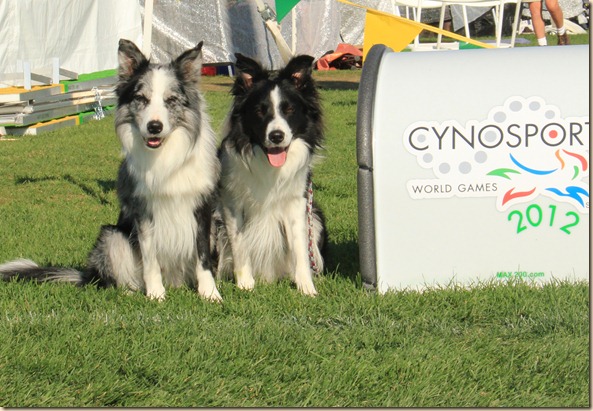 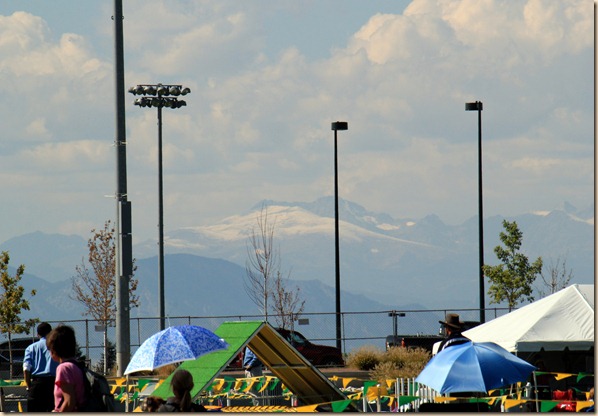 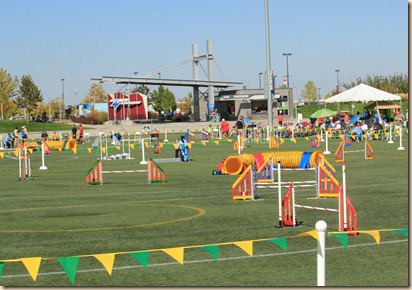 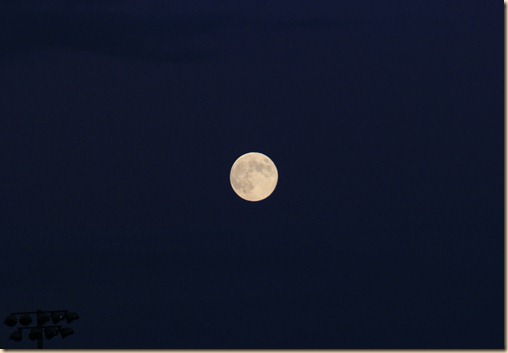