How can it be that September is more than half over? We had a super time at The Blackthorne in the Catskills in NY September 9, 10 & 11. It was a very small trial, hosted by Y Agility, but it was stress-free and filled with laughs and good times all around. Making it even better was bringing home some ribbons. Dandy had a rough start to the weekend, having been on R & R with torn pads for the past week, but things improved as we got a bit more in sync. No Snooker for Dandy at this trial as I really wanted to focus on the Gamblers class, and that paid off, he qualified twice in Gamblers, both 1st place, and finished his Gambler Champion title! He also qualified in Masters Standard with a 1st place. My friend Barb and I took advantage of a new rule in USDAA Pairs that allows a host club to offer the option of mixed height pairings. So Barb’s 12” jumping Corgi Olivia ran pairs with 26” jumping Dandy. We ran clean and qualified and took 3rd place in the “big dog” division! Rounding out the weekend, Dandy qualified in Steeplechase taking 1st place in both Round 1 and the Finals.

My goal with Tempo was to qualify in Starters Snooker to finish his Agility Dog title. Thankfully, we accomplished that on the first day. Tempo had a different opening planned than I did, engaging in lower point obstacles than I had wanted, so I had to improvise the entire opening. But we finished the close and he pulled off a Q with 44 points, earning his AD! He also earned a few more legs over the weekend, one each in Advanced Jumpers, Advanced Standard and Advanced Snooker (50 points!), and all blue ribbons. I had not entered Gamblers with him, so that will be our next project, Advanced Gamblers. Tempo also made his debut in Steeplechase. He did not qualify but it wasn’t awful; he knocked 2 bars, and we lost some time when he wasn’t sure where I wanted him to go, but it was a fairly technical course for him. He got to run in Round 2 since so few dogs qualified; he went off-course by popping the weaves and going on to the AFrame before I could fix it. But again, not a bad run for the baby boy.

Tempo’s littermate Quid was there also and had some very nice runs in Advanced, including a great qualifying run in Advanced Snooker.

The following weekend we headed to Massachusetts for the K9Logix trial in Greenfield. What perfect fall weather we had!!! So nice to NOT have heat & humidity!!! Dandy had a great weekend, with a 75% success rate. He qualified in Masters Snooker with a Super Q and 2nd place, and in Masters Pairs to finish his Relay Champion-Bronze title! He qualified in Steeplechase, though only placing 6th in round 1 when he missed his weave entry, and we lost time with an AFrame bobble. But he rallied for Round 2 and finished in 2nd place. Grand Prix was a tough course, there was one spot in particular that offered several options for handling. Unfortunately, Dandy was the very first dog to run and I could not watch others run to see what was working and what wasn’t. So I went with the option that I felt would work best for MY dog. It was dicey but we got through it clean and earned our first Q for 2012. Icing on the cake, Dandy took First Place in 26” and earned a Bye into the Finals of a 2012 Regional! The last class of the weekend was Master Jumpers, and we ran near the end. I watched this course that looked easy on paper just chew ‘em up and spit ‘em out. It was a total speed course, rather than being technical, and lots of bars were coming down, along with some off-courses. Incorporating a blind cross and a couple of rear crosses, Dandy ran clean! I was thrilled as this run finished his Jumpers Champion-Bronze title! Right after our run, however, I learned that the timer malfunctioned. I had the option to either run it again for time, or just take Standard Course Time. I elected to just take Standard Course Time as Dandy had bent his dewclaw and I was worried he would hurt himself. Dandy usually runs about 10 seconds *under* SCT, so he would have surely placed 2nd, or possibly 1st, but we took the 4th place ribbon rather than risk running again with a busted dewclaw.

In addition to a great trial, I also enjoyed some more ‘family reunion’ moments. Dandy, Tempo & I stayed with our friend Janet, and Tempo had his picture taken with his Uncle Rip (Token’s littermate). The black and white boys look so stunning together. Tempo’s littermate Maze was at the trial, and she looked great, bringing home some Q’s and ribbons of her own. Donalee and I took advantage of the day and snapped some photos of the 3 siblings together (L-R: Dandy, Maze & Tempo). 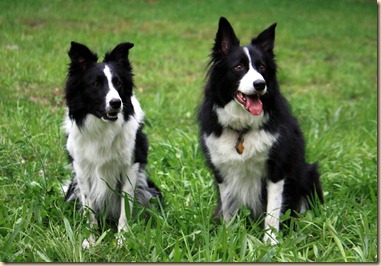 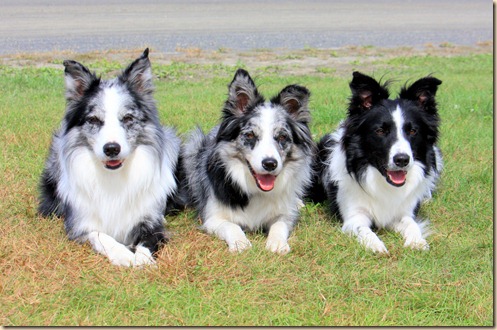