Thanks to Facebook---- Dandy, Tempo and I made an unplanned trip to a Flyball tournament in Exton, PA, on Sunday, January 15, to fill in for team that was short a dog at the last minute. A team from New Jersey had 2 Border Collies and a Cavalier KC Spaniel as the height dog, but they needed a 4th dog to be able to race. They were entered in Regular Division 2 but were running as “Performance” (due to picking up non-club members to round out the team this weekend) meaning the team was not eligible for any placement, but could earn points for the dogs who raced. I thought it would be a good diversion for me, having just hit the one-year anniversary of Token’s passing. I could drive down to Exton in the morning, in less than 3 hours, so I volunteered to fill in for them.

I planned to alternate Dandy & Tempo throughout the day, with 8 races on the schedule. We had challenges from the start, with a runback of only 35’. And the box was a little bit different that what my dogs are used to. And the only tennis balls they had were soft “squishy” tennis balls, which were very different from what my dogs are used to. In the first race, I ran Dandy as start dog. He bobbled the ball a couple of times, he doesn’t really like squishy balls and had to learn to adjust. But we did OK.

I thought I’d run Tempo in our next race, so I took them both out to potty in between. Good thing…

When we were on deck, the owner of the Cavalier (our only  height dog) told us his dog was injured and could not run…so we had to run a team of four Border Collies, jumping the maximum allowed height of 14” rather than the 7” we had planned on. My dogs have never done 14” in flyball….sure, they jump 26” in agility, but with only 10’ between flyball hurdles, where a flat trajectory is desirable, 14” totally changed the way they had to jump. AND we had NO time to warm up to even let the dogs know they were now jumping 14”, we were scrambling to figure out a plan, quickly! Adding more complications, this also meant that Tempo and Dandy had to BOTH run in all the races. On the way into the ring, a friend was standing by, she volunteered to help so I handed her Tempo’s leash and away we went. (Thank you, Heather!!) Dandy was the start dog, and Tempo ran anchor. He did fantastic, especially considering that no one but me has ever handled him. Both dogs dealt with all the craziness like true professionals. Our team won every race, but were not eligible for any placements due to our team having dogs from different clubs at the last minute. But we earned lots of points towards our titles, and had lots of fun!

One very ironic thing is that one of the dogs we raced with was a Border Collie named Kelli. Token had a wicked crush on Kelli. Whenever we raced in Region 15 (PA/NJ/etc) and raced against Garden State Barkway, I had to be on my toes because Token would always make attempts to run over and visit Kelli. He was so naughty, but fortunately Kelli’s owner was understanding, and found it amusing. How bizaare…on the weekend that marked one year since Token has been gone, BOTH of his sons, Tempo & Dandy, raced alongside this girl that he was so infatuated with. Fortunately Dandy & Tempo kept their brains engaged in flyball instead of Kelli…but I have to believe that Token was there with us, enjoying the odd reunion.

This tournament was hosted by Chaos Unleashed…and that was quite fitting!

I even have a few pictures to commemorate the occasion, thanks to Erica who stopped by with her family to see what flyball was all about.

This picture shows Heather with Tempo, me with Dandy, and behind us Kim with Kelli, Token’s heartthrob. How cool is that? 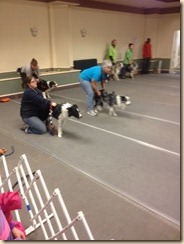 It’s Been One Year….

…since that painful day that I lost Token. Such a knife to the heart. A punch in the gut. 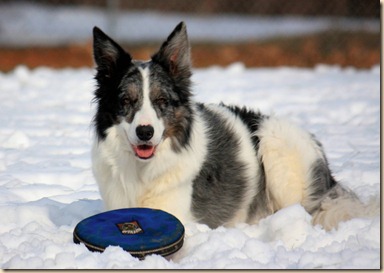 Getting through the first year is a milestone for me…I’ve gotten past most of the ‘firsts’…First time back at flyball, first agility trial running just one dog, first birthday without him… I trust it gets a bit easier now. Missing him is normal, and is bad enough. The unfairness of losing him way before his time makes me both angry and sad. But on we go… Dandy & Tempo continue to make it all bearable. My little pieces of Token, still with me. I know his spirit is always close by. But I still miss him every day. Sure, it’s nice that the bath towels are no longer pulled off the rack. The stuffed toys in the house last longer than five minutes. He wasn’t perfect, he had his naughty streak. But he was one of the best nevertheless…I miss his nuzzling, his hugs & kisses, his joy for life. His larger-than-life personality. He was special, not for agility or flyball, but for his connection to people. He had an aura about him that was something very special. I’m so lucky that he shared his life, as shortened as it was, with me.

I love you, Token, and miss you every day. Wait for me at the Bridge the way you waited for me to get home one year ago today, so I could be with you at the end. Until then, I hope to see you again in my dreams.